On Wednesday 9th February, EUROfusion and the UK Atomic Energy Authority announced the results of the latest experimental campaign on the JET tokamak, which used deuterium and tritium fuel and broke the record for fusion energy produced. It made headlines around the world.

So, what have they achieved and how significant is it?

What have they done?

This builds on a past deuterium-tritium (DT) campaign from 1997. Whilst they haven’t exceed the peak fusion power produced (16 megawatts (MW) in 1997, average of 11MW today) or the scientific Q value (the ratio of energy out to energy in, 0.7 in 1997, 0.33 today) they have doubled the fusion power produced in a sustained 5-second pulse.

Work on the JET tokamak has also highlighted the development of remote handling robotic capabilities, which will be critical for future commercial fusion power plants.

Why is this result impressive?

The scientists have more than doubled the energy output from fusion over a sustained timescale. Keeping the plasma conditions right for fusion over the longer timescale is what will be required for future power plants.

5 seconds is long time on fusion timescales. It is more than ten times the “energy confinement time”, which is the time takes energy to leak out of the hot plasma. This gives confidence that this timescale can be extended on future tokamaks with superconducting magnets, such as ITER.

Additionally, this doubling in performance has been attained on the same machine as in 1997, but with upgrades to the inner wall materials, among other capabilities. This shows the importance of advancing fusion technology.

Dennis Whyte, Director of MIT's Plasma Science and Fusion Center, says: “The result is significant for fusion because in the end what counts is energy production. Increasing by more than a factor of two the record for energy output from fusion reactions is exciting. We heartily congratulate our colleagues at JET.”

Why is it important?

JET is currently the only magnetic confinement fusion machine that operates with actual fusion fuels, deuterium and tritium. It is a key machine for research that feeds into ITER, the large international tokamak currently under construction in the South of France. This is because it is closest in size to ITER and also has same wall as ITER will have, made of beryllium and tungsten.

These experiments show that the ITER-like wall was successful in improving fusion performance.

The achievement of sustained high fusion power with real fusion fuels means that the team were able to study alpha particles—the helium nuclei that are produced by the fusion reactions—and how they affect the plasma. What they found fit with predictions from their models, which are crucial to predict performance of ITER and other future machines.

JET and ITER are both public-lab, government-funded experiments, but the results also have implications for the growing private sector.

“This affirms that the leading concept for magnetic fusion, the tokamak, is well understood and can be optimized to increase fusion energy production,” said Dennis Whyte. “But just as important is it provides impetus and encouragement to the magnetic fusion efforts in the private sector, where the emphasis is on improving both energy and economic prospects for tokamaks through technology innovation.” 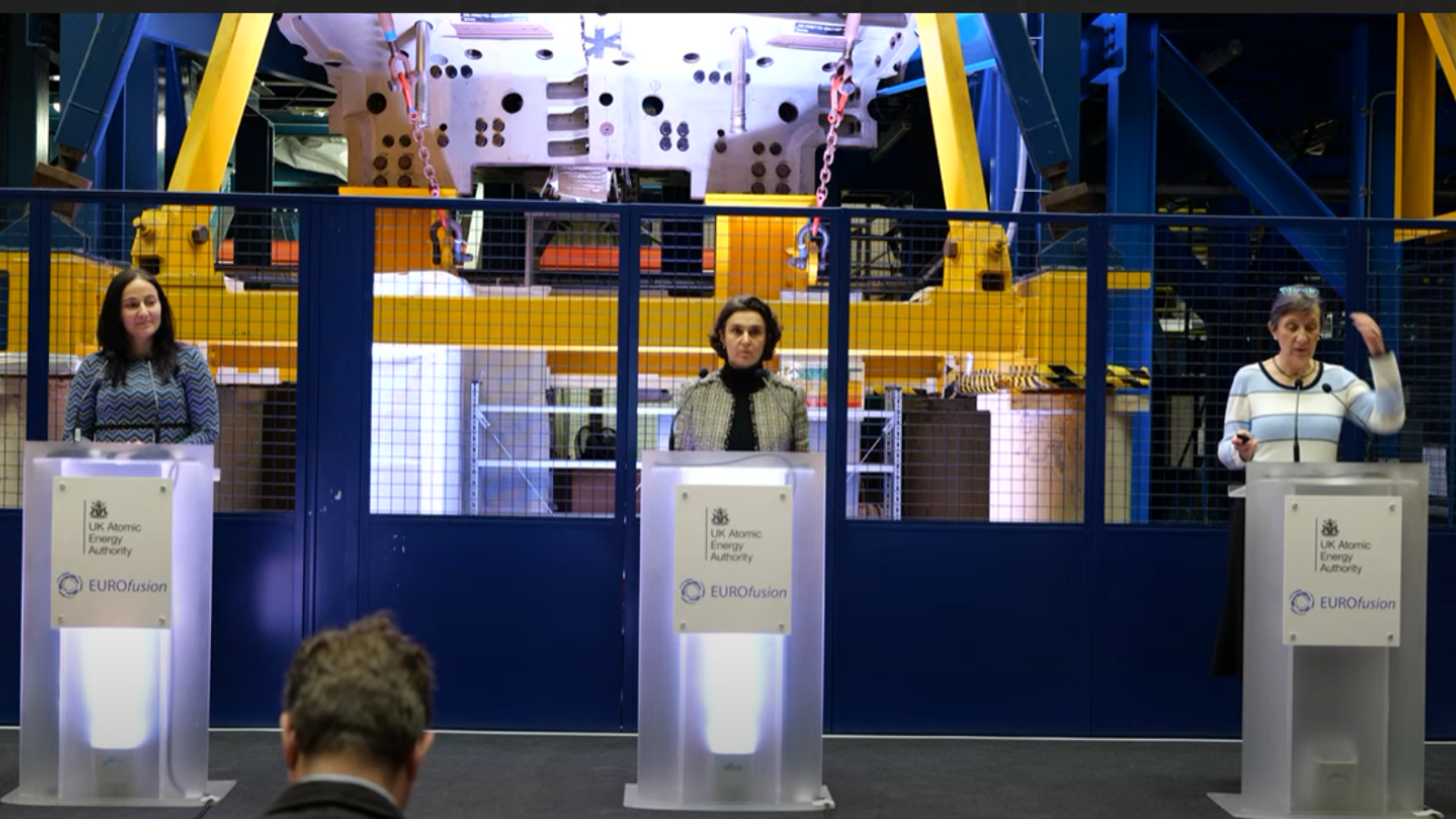 The JET results are good news for ITER. Scientists are confident it will achieve its goal of 500MW of fusion power and Q=10. ITER plans to have first plasma operations at the end of 2025, but attempts to get past energy breakeven (Q>1) won’t be until several years later, probably in the 2030s.

JET will operate until the end of 2023 and they plan to have another DT campaign, provided the political agreements are in place.

Meanwhile, private companies working on tokamak concepts, such as Commonwealth Fusion Systems (CFS) in Massachusetts, USA, and Tokamak Energy in Oxfordshire, UK, will be constructing tokamaks at JET-scale or smaller with powerful high temperature superconducting magnets. They are aiming to exceed energy breakeven sometime this decade before moving on to demonstration power plant concepts.

Dennis Whyte says: “With higher fusion energy production confirmed by JET, the next frontier is to explore plasmas that produce net energy and are dominantly self-heated—two linked requirements for fusion power plants—which will be explored in SPARC and ITER."

He continues: “The JET result of achieving near constant fusion power for just over 5 seconds is highly confirmatory of the SPARC approach which will produce fusion power for a similar duration. But with the added large multiplier in performance gained by the new superconductor magnets demonstrated in 2021, we expect over 10 times more fusion power and energy in SPARC. This arises from access to a much higher confining magnetic field with the new magnets, yet using the same physics rules confirmed by the JET results.”

Fusion energy is coming. The fusion industry is growing. Can you afford not to be informed?

Get all the insights and access to the FEI community by becoming a member of Fusion Energy Insights today.